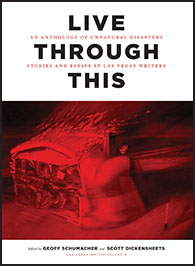 Las Vegas was built on millions of intimate unnatural disasters.  Bad turns of the cards. Unlucky rolls of the dice. In both fiction and essays, this anthology extends the dynamic of unnatural disaster beyond the gambling parlors and into the streets, homes, and eccentric spaces of Las Vegas.

In the nonfiction section, you’ll descend into a decades-old atomic bunker, given new relevance by international hostilities; follow a foster mom as she deals with the drug-addicted bio-mother of her children; and gauge the meaning of #VegasStrong through the lens of the video game Fallout: New Vegas.

The fiction is equally eclectic, taking in the Las Vegas of the past (Bugsy Siegel and Virginia Hill on the eve of the Flamingo’s opening), the present (a loser drifts into danger as he investigates an “accidental” disaster), and the future (an Ocean’s 11-style sci-fi romp).

Together, these 11 pieces show some of the ways life in Las Vegas is shaped by things going haywire — and by how we face failures and fiascos.

Other Books by Vegas Writes: