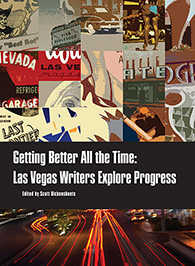 Produced in conjunction with the Vegas Valley Book Festival, this 2013 edition is the fifth collection in the series. The nine stories explore the concept of “progress,” from a positive perspective — downtown’s rejuvenation; personal stories of emotional or spiritual growth — to the flipside of social dislocation and other dark portents highlighting the limits and risks of change and “modernization.”
As a city that, from its very inception has consistently challenged convention, Sin City has always coined its own definition of progress. In these stories and essays by some of Las Vegas’ finest writers, you’ll see how locals weave spectacle, risk, and reward into the narratives of civic, political, financial, and personal progress — and at what price it comes.
Writers Include: Aurora Brackett, Henry Brean, Geoff Carter, Abigail Goldman, John Katsilometes, Rena Mason, Kris Saknussemm, Doug Unger, Sarah Jane Woodall
Other Books by Vegas Writes: