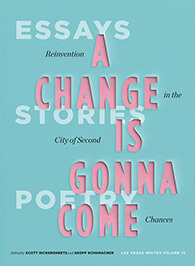 Another chance: That might be the purest product of Las Vegas. The idea is that you can be a new you with one turn of a card, an off-the-hook Strip weekend, or just a fresh address in the neon. Reinvention is one of the core mythologies of this place, which makes it the perfect theme for this milestone tenth volume in the Las Vegas Writes anthology series.

The stories, essays, and — for the first time — poetry in A Change Is Gonna Come explore this rich concept in ways large and small. In one poem, cranes tower above the changing cityscape in a tableau of civic vigor; in another, Frank Lloyd Wright contemplates pancakes in a casino diner; a third offers a cop’s-eye view of the city’s dark side.

Among the nonfiction, you’ll meet a Las Vegas singer who continually readapts in the face of catastrophic health challenges, a writer who sheds his old life, and a public figure considered an icon of reinvention is revealed not to have changed at all.

On the fiction front, a husband finds himself baffled, angry, and terrified by his wife’s new diet; a woman copes with her husband’s strange new self; and a suburban resident wages a war of words with her HOA.

As these writings vividly show, no place embodies the wild possibilities of change quite like Las Vegas.

Other Books by Vegas Writes: