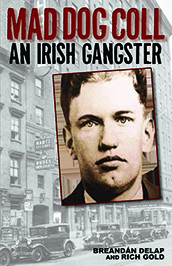 Prohibition-era New York City was overrun by gangsters who relied on muscle to make their mark, but few were as vicious as Vincent “Mad Dog” Coll. An Irish immigrant who grew up in reformatories and on the mean streets, Coll played by his own rules, and by the time he turned 20, even the outlaws had outlawed him.

Coll took street violence to another level, but there was brilliance behind the mayhem. He and his crew pioneered the drive-by shooting and systematically cut down the opposition during one of the most turbulent times in America’s storied mob history. Yet amid the ruthless savagery that forced even the notorious Dutch Schultz into hiding and propelled Coll to number one on the Most Wanted list, the real brains behind this enterprise was a woman.

The quintessential gun moll, Lottie Kreisberger channeled the Mad Dog’s aggression to terrorize New York—from innocent bystanders to organized-crime’s biggest bosses, no one was exempt until Coll met his destiny in a phone-booth ambush. Incredibly, considering the extreme impact he had on his era, Vincent Coll’s life ended at the tender age of 23.

About the Authors: Breandán Delap and Rich Gold