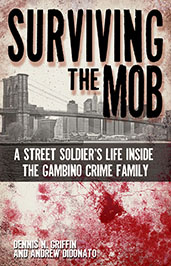 He was also involved in the underworld gambling operations, which took in millions dealing dice and cards, booking sports and horses, and running numbers. This is the most in-depth look at Mob gambling ever published—and some of the secrets revealed will surprise you.

Surviving the Mob is a cautionary tale of the harsh reality of a criminal, inmate, fugitive, and witness who—so far—has lived to tell the tale.

About the Authors: Dennis N. Griffin and Andrew DiDonato