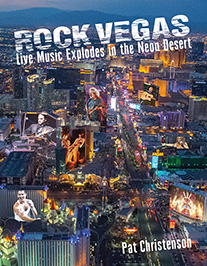 As recently as the early ’90s, Las Vegas was considered the place where headlining bands went to die. Despite its reputation as the “Entertainment Capital of the World,” the city was all but devoid of major touring acts, as the paradoxically conservative instincts of the casino bosses and city fathers made it difficult for cutting-edge bands, especially rock ’n’ rollers, to gain a foothold.

Then the floodgates opened.

In less than three decades, Las Vegas evolved into one of the top five live-music markets in the world. How did it happen? How did Vegas make the transition from Frank and Dean, Wayne and Engelbert, and the Folies Bergère to a city with more than 500,000 seats for live-music events that draw more than three million fans annually?

Rock Vegas chronicles the contemporary history of concert bands, venues, promoters, and marketers, as seen through the eyes of one of the live-music industry’s most prominent participants. As the Director of Thomas and Mack Center and President of Las Vegas Events, author Pat Christenson has been an integral part of more than 500 live-music events over 35 years. In these pages, Christenson shines a spotlight on the people, events, and circumstances that made this revolution possible, while detailing the behind-the-scenes innovation that let Vegas rock and opened the door for the greatest live-music explosion in American-entertainment history.

About the Author: Pat Christenson