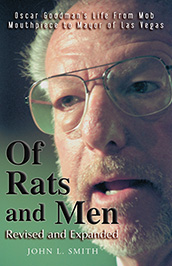 So, was Goodman only what he claims: an attorney who defended his clients based on the simple principle that they, too, have constitutional rights? And if so, how did he manage to mingle with the mob for decades without becoming part of it?

This edition of Of Rats and Men has been expanded with five new chapters that bring Goodman’s story fully up-to-date. A must-read for any fan of Las Vegas and its colorful past — and even more colorful former “mob” mayor.

About the Author: John L Smith