King Yao was born in Taiwan and moved to the United States at the age of six. In 1992, he graduated from Carnegie Mellon University in Pittsburgh with a BS in economics in three years. From 1992 to 2000, he worked for Susquehanna International Group as a derivatives trader. His experiences include trading equity options on the American Stock Exchange, currency options at the Bank of New York (in partnership with Susquehanna in currency derivatives), crude oil and gasoline options at the New York Mercantile Exchange, and CMO (collateralized mortgage obligation) derivatives for Susquehanna’s proprietary account.

In 2000, Yao left his job to pursue gambling full time. In 2005, he wrote his first book, Weighing the Odds in Hold ’em Poker, which covers Texas hold ’em from an analytical approach. In 2007, he wrote his second book, Weighing the Odds in Sports Betting, which covers sports betting from an analytical perspective, relating it to the financial markets. He translates experience gained from the financial markets into gambling for his personal betting and writings. He travels to Las Vegas frequently, especially during the NFL season. 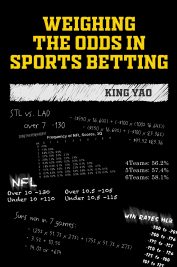