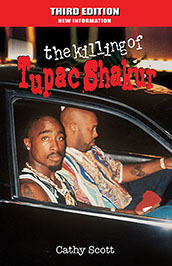 It’s been almost 20 years since poet, revolutionary, convict, and movie star, Tupac Amaru Shakur (a.k.a 2Pac, Makaveli, or simply ‘pac), was gunned down at age 25 while he sat in traffic with Suge Knight near the Las Vegas Strip following a Mike Tyson fight at MGM Grand. In the new updated and expanded third edition of this acclaimed biography, Las Vegas crime writer Cathy Scott has finally been able to include the previously unpublished chapter featuring the account of that last fateful night from “Big Frank,” the rapper’s now-deceased personal bodyguard.

The raw no-holds-barred narrative, which includes exclusive photo evidence (including of Tupac’s autopsy), is the definitive account of the unsolved murder of Tupac Shakur: the many possible motives, the failed investigation, the rap wars, the killing of Biggie Smalls, the Bloods-Crips connection, the Suge Knight and Death Row Records association, and the subsequent fate of numerous principals involved in the aftermath. It is also a sensitive, candid, and insightful account of the contradictory icon who remains not only one of the most influential rappers ever but, with more than 75 million records sold worldwide, he’s also one of the best-selling music artists of all time.

About the Author: Cathy Scott