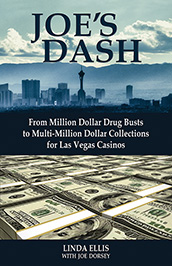 Joe Dorsey’s career began in the Navy on the flight deck of an aircraft carrier, one of the most dangerous work sites in the world—and it got riskier from there.

In the Coast Guard, Joe’s search-and-rescue missions often involved jumping out of helicopters in violent ocean storms to save lives. As a detective in the DEA’s Narcotics Task Force in San Diego, he went undercover to bust big dealers and disrupt treacherous cartels. And as an agent for the Nevada Gaming Control Board, he investigated the backgrounds of unscrupulous junket reps and notorious mobsters.

Joe began to make his mark on Las Vegas as the director of security at several major casinos—uncovering employee theft and gambler scams, reining in prostitution, protecting the public at major events, and putting out literal and figurative fires. But it was pioneering the previously unbroken ground as a casino debt collector where Joe made his indelible mark, turning the District Attorney into the official collection agent of the Las Vegas casinos and recovering millions from gamblers in Europe, the Middle East, and Asia who’d thought they’d finally beaten the casinos.

Security and debt collecting are hidden aspects of the gambling business. In Joe’s Dash, they’re revealed for the first time ever.

About the Author: Linda Ellis