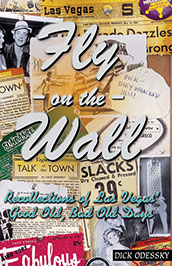 A chronicle of Vegas during the glamorous ’50s and ’60s by a newspaper reporter and publicist who was in the thick of it—the proverbial fly on the wall.

Back then, “the boys” ran the town, dinner shows were a dollar, and vacant lots on what’s now the Strip sold for $5 an acre. Tallulah played baccarat, Shecky shot dice, and Frank dealt blackjack.

Fly on the Wall chronicles those times, as well as the men and women who shaped them.

About the Author: Dick Odessky