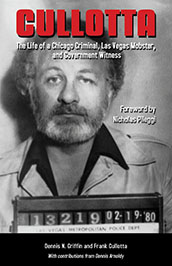 From burglary to armed robbery and murder, infamous bad guy Frank Cullotta not only did it all, in Cullotta he admits to it—and in graphic detail.

Cullotta’s was a world of high-profile heists, street muscle, and information—lots of it—about many of the FBI’s most wanted. In the end, that information was his ticket out of crime, as he turned government witness and became one of a handful of mob insiders to enter the Witness Protection Program. Some of that information has since been responsible for solving a decades-old cold-case double-homicide.

About the Author: Dennis N. Griffin