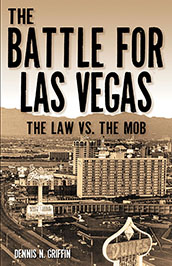 From the 1970s through the mid-1980s, the Chicago Outfit dominated organized crime in Las Vegas. To ensure the smooth flow of cash, the gangsters installed a front man with no criminal background, Allen R. Glick, as the casino owner of record, Frank “Lefty” Rosenthal as the real boss of casino operations, and Tony Spilotro as the ultimate enforcer, who’d do whatever it took to protect their interests. It wasn’t long before Spilotro, also in charge of Vegas street crime, was known as the “King of the Strip.”

Federal and local law enforcement, recognizing the need to rid the casinos of the mob and shut down Spilotro’s rackets, declared war on organized crime.The Battle for Las Vegas relates the story of the fight between the tough guys on both sides, told in large part by the agents and detectives who knew they had to win.

About the Author: Dennis N. Griffin