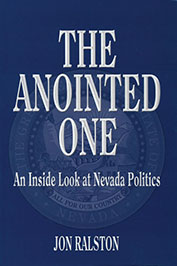 Kenny Guinn was elected the governor of Nevada in a 1998 landslide. But the outcome was determined long before a single voter stepped into a polling booth. In The Anointed One, Nevada’s foremost political reporter, Jon Ralston, argues that the power and money of the casino industry, combined with the behind-the-scenes string-pulling of a powerful and ruthless cabal of political insiders, render important Nevada elections a mere formality.

Guinn had never before been on a ballot. But he’d cultivated the right friends, served on the right boards, and paid decades worth of political dues. Thus, when he decided to call in his markers, the powers that anoint paid off.

The Anointed One isn’t just the story of how an inexperienced and shaky candidate waltzed away with the highest office in the state. It’s a biting commentary on the inner workings of the Nevada political machine.

About the Author: Jon Ralston