Annie Duke earned a double major in English and psychology at Columbia University and an MA in Cognitive Psychology from the University of Pennsylvania. She was also a National Science Foundation Fellow from 1988 to 1991.

Since 1994, she has dominated poker, quickly establishing herself as one of the world’s best players. In her very first tournament at the World Series of Poker, she placed 13th.

In 2004, she won her first WSOP bracelet (in the $2,000-buy-in Omaha Hi/Lo Split). That same year, she knocked out nine poker legends to win the no-limit Texas hold ’em invitation-only WSOP Tournament of Champions.

In 2010, Annie won the prestigious NBC National Heads-Up Poker Championship, beating 64 of the world’s top players on her way to a $500,000 first prize.

Annie parlayed her skills into an industry-leading career that encompasses tournament play, advising gaming companies, authoring instructional books and videos, and as a proponent of players’ rights. A longtime industry advocate, Annie has testified in front of the U.S. House of Representatives’ Judiciary Committee on online poker legislation and the U.S. House of Representatives’ Financial Services Committee; she continues to be a leading voice for online gaming.

Annie has also become a prominent television personality, and is recognized worldwide for her runner-up finish on Donald Trump’s “Celebrity Apprentice.”

Today, she is League Commissioner of Federated Sports + Gaming. She’s also an instructor at the World Series of Poker Academy. Her website is annieduke.com. 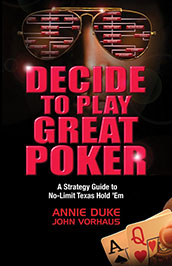