Bertrand “ElkY” Grospellier is a 30-year-old French tournament-poker phenomenon. Starting out as one of the world’s top-ranked pro StarCraft gamers, he switched to poker and has been climbing the money ladder ever since. ElkY was the first player ever to reach ever to reach “Supernova” and “Supernova Elite” status on PokerStars. In 2008, he won the European Poker Tour’s Caribbean Poker Adventure and the World Poker Tour’s Festa al Lago Tournament at Bellagio. In 2009, he won the 2009 Caribbean Poker Adventure’s $25,000-buy-in High Roller side event and was named World Poker Tour Player of the Year. Recently, at the European Poker Tour Grand Final in Madrid in May 2011, ElkY won both the $10,000-buy-in High Roller Turbo, $25,000-buy-in High-Roller event, and $25,000-buy-in Scoop Heads-Up tournament, cashing more than a US$1 million. As of that date, his total live tournament winnings exceeded $7,500,000. 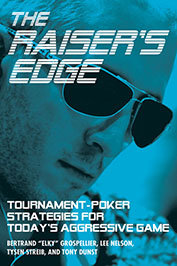